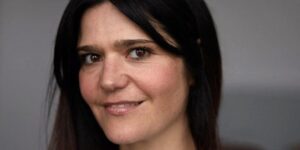 Bindu is an award-winning screenwriter, director and actress. She was born in India to a Swiss – Italian mother and an American father. She grew up in Devon, the USA and Switzerland, before coming to London to train at the Drama Centre London, the London Film School and at Raindance. She wrote and directed her first short film THINGS I NOTICE. THINGS YOU SEE starring Michael Fassbender in 2000 and in 2012 she wrote and directed her first feature film JUMP which won 5 BIFF awards at the 2012 festival, including Best Director and Best Feature Film. Her second feature FINDING CAMILLE premiered at the Rome Film Festival in the autumn of 2017 and her next feature, 40 & CLIMBING, will be screened at festivals across 2022. For television Bindu show ran the new Netflix Italy original series AN ASTROLOGICAL GUIDE FOR BROKEN HEARTS based on Silvia Zucca’s hit book, which she co-wrote and co-directed, the first season premiered in 2021 on Netflix and season 2 was released in early 2022.

Please come and join us for a talk by Bindu de Stoppani and refreshments at the Embassy of Switzerland following the Annual General Meeting of the New Helvetic Society at 7.30pm.