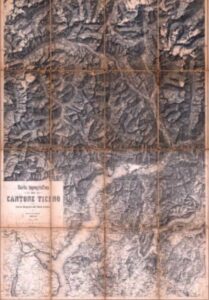 Winter lecture: The Federal Office of Topography swisstopo and the history of cartography in Switzerland

In 1837 Guillaume-Henri Dufour founded the predecessor of today’s Swiss Federal Office of Topography swisstopo in order to work out and publish the first official map of Switzerland, the Topographic Map of Switzerland. With the publication of the first sheets of the map in 1845, the map provided a vision of the modern federal state that had not been founded yet and was still a union of states that was about to plunge into civil war. The successful map was soon supplemented by the Topographic Atlas of Switzerland and was succeeded by the National Map (Landeskarte) in the 20th century. The presentation will give an oversight of the history of official cartography in Switzerland and also touch on peculiar subjects, such as what Mount Everest has to do with Swiss cartography.

Philippe Frei, Dr. Phil. is curator of the map collection of the Federal Office of Topography swisstopo. He studied history at the Claremont Colleges, California and wrote his doctoral thesis at the University of Lucerne, Switzerland. He holds advanced degrees in archival and library studies. His research focuses on the history of cartography, global and cultural history