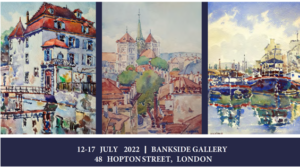 “The Life and Works of Maurice André Kaspar 1892-1946”
An exhibition of over 200 original watercolour paintings never before publicly displayed in the UK, by little-known Swiss artist, Maurice André Kaspar, brought together from around the world by his grandson, René Dee.
Over a 30-year period from 1914 Maurice painted iconic scenes from Geneva Old Town, where he was born, raised, schooled and worked; from the Italianate town of Carouge in the Canton of Geneva where he later lived and raised his own family, and many other small villages and towns in Switzerland, France and Italy. He was an architect by profession who worked for Geneva State Council and was particularly interested in the complex and often beautiful architectural features of the many traditional farmhouses, manor houses, chateaux and churches throughout rural Switzerland and France at that time. Many of his paintings are important historical records, none more so than those he painted in the 1920s, and now a pictorial record of the Geneva district of St. Gervais alongside the River Rhone. St Gervais was demolished in the early 1930s. In 1937, Maurice became a founder member (one of 13) of what would become an important society of multi-disciplinary artists called, La Palette Carougeoise, still in existence and a major force for the arts in Carouge.