We are celebrating the 149° UT anniversary in style, with a Piano Concert and a Reception.

Margherita Torretta will be delighting the audience with a piano concert.

Margherita Torretta affirms her artistic personality through her passion for music, fashion design, photography, poetry and dance, with the mission of expressing the value of beauty understood as a set of human qualities such as determination, courage and elegance.

Margherita performed all over the world in concert halls such as Carnegie Hall in New York, auditorium Sala Verdi, Sala Puccini and Villa Reale in Milan, the ALTI hall in Kyoto,, the Steinway Hall in London, the Marcello Amphitheater and Sala Baldini in Rome, Ehrbar Saal in Wien, The Palm Beach Atlantic University in Florida, the college of the Conservatory of Moscow, the concert hall of Fryderyk Chopin Institute in Warsaw and many others.

Born in Italy, a small town in the province of Piacenza, Margherita devotes herself to piano and music in old age, achieving with honors studies at the local conservatory G. Nicolini. Later she perfected her studies at the G. Verdi Conservatory in Milan and received a substantial scholarship from the German foundation “Theo Lieven” to attend the Master in Performance and Interpretation at the Conservatorio della Svizzera Italiana in Lugano, completed with honors.

Margherita is given the opportunity to be a student at the Bell’Arte Foundation based in Brussels with Maestro Nelson Delle-Vigne Fabbri, and at the prestigious Lake Como Academy directed by the pianists and professors Martha Argerich and William Grant Naborè, having the great chance to grow artistically with Charles Rosen, Dmitri Bashkirov, Fout’s ong, Stanislav Ioudenitch, Malcolm Bilson and Vladimir Mitchouk . 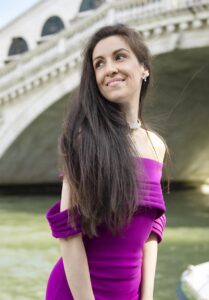 The passion for the visual arts as the photography, led her to collaborate with the famous British photographer Sophie Mayenne for the world campaign “Behind The Scars” with the aim of witnessing a feminine beauty that deviates from the models of aesthetic perfection imposed by today’s society.

Margherita regularly teaches in UK and organizes courses and masterclasses in Europe, America and Australia.

In 2020 she released a first album dedicated to Domenico Scarlatti’s keyboard sonatas with the Swiss label Academy Classical and in 2022 she released a second album dedicated to the venetian composer Baldassare Galuppi. She held interviews and concerts on important radio broadcasters among which RAI radio 3, RSI Radiotelevisione Svizzera Italiana and Radio France Musique.

You can read more about Margherita on her website.